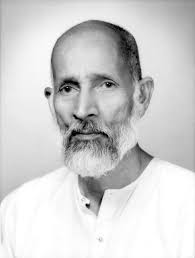 Sri Ramchandra was born on the auspicious day of Baisakh Badi Panchami in the Vikram Samvat 1856 (30th April 1899) at Shahjahanpur in Uttar Pradesh, India. When cosmic order of Nature is affected by the greedy and egotistic personalities, whose existence is the main cause of deterioration of Divine Law, like a Ravana or a Kamsa, Divinity sends out Personalities who are called Avatars with special powers even as was done in the cases of Lord Rama or Lord Krishna. These personalities are essentially meant to destroy the evil tendencies and after their purpose is over they get back to their original abodes. But in human history for the first time the number of highly selfish and treacherous persons who are in no way inferior to demons like Ravana and Kamsa, increased to such an extent as a consequence of the industrial revolution and disproportionate consumerism by the middle of the last century. Several Prophets were sent about 2000 years ago but their messages and instructions were followed more in breach.

Though it is too early to bring in one more Avatar, having failed with the Prophets sent to reform human nature, Nature was waiting for a proper person to be prepared as a Special Personality who would be required to overhaul the entire Universe and set things in order. No such Personality was ever sent by Nature so far as the situation never warranted such a move. Nature had to provide for such a Special Personality. Nature had necessary powers not only for construction and reformation but also for destruction. Such was the position of the world during beginning of the 20th century and as there was no other possibility for the Nature to overhaul it, except to prepare a person to the stature of a Special Personality. A highly evolved soul was deputed to prepare such a Special Personality by Nature in the form of Sri Ramchandraji Maharaj of Fatehgarh (also called Lalaji Maharaj) on 2nd February, 1873 and he was waiting for a proper person for the task allotted to him.

On 30th April 1899 in Shahjahanpur Sri Badri Prasad was blessed with a boy who was also named as Ramchandra. With his Divine perception Lalaji Maharaj came to know that the boy for whom he is waiting for was born in Shahjahanpur and the preparation started from that day. Sri Ramchandra of shahjahanpur also called as Babuji Maharaj was thus under the care of the Master, Sri Lalaji Maharaj right from his birth and there was always an unknown urge in him keeping him restless. When this matured, he went to the feet of his Master Lalaji Maharaj on 3-6-1922 and finally emerged as Special Personality during the year 1944 and from that day onwards he has been discharging his duties entrusted to Him by Nature and will continue to do so for a millennia.

Spirituality is native to Indian soil. It had been the good fortune of this land to always adhere to the principles of tolerance and forbearance in life. This was something that is unique that is therefore called rightly as Karma Bhoomi. The capacity of the land to absorb different systems of philosophy which are called Darshanas (the way of seeing) is unique and therefore all the great movements of spirit from the Vedic period, through Jainism, Buddhism, Nyaya, Vaishesika, Samkhya; Yoga and the Mimamsa or Vedanta along with other religious systems of Shaiva, Vaishnava and Shakteya got themselves beautifully blended and integrated into the way of life in this land, call it Hindusthan, Bharat, India or Hind as anything of one's choice. This is the spiritual way unique to this land. This country never invaded others for extension of empire but definitely influenced many in their spiritual lives. The Muslim leaders also understood it and they integrated themselves well into this fabric. This could be seen in the attempts made by the great emperor Akbar who even came forward with a new religion called Din Ilahi which, however, did not gain much acceptance for whatever historical reasons

But the scenario changed with the advent of the European invasion in the name of trading starting right from the diabolic and ill intentioned adventure of Vas co de Gama followed by many more such persons all with an attempt not only to trade and exploit the material worth but with the definite intention of continuing their crusades for the propagation of their religion Christianity of all types and hues. Things became worse for the country whatever the reason of Providence may be for that and India was tottering hopelessly in all respects and more so in its spiritual life. The hatred and contempt towards other religions is unique to this new religion Christianity and it believed in exploiting every means all in the guise of doing good to others and saving their souls which was prima facie accepted by the poorer section mainly due to economic compulsions and in conditions of utter helplessness. It is very interesting to note that while it condemns every one to be a sinner, it simultaneously says the sinners are capable of loving. This land, which knows and feels the Divinity inside, has always been stressing that and pleading with all to develop this divine resource. The new religion, however, says that the basic resource of human being is Sin and yet states that it can develop Divinity in all. The philosophy of Karma which means that every one is responsible for acts of commission and omission and that the individual has to grow into a better human being and through that to the level of Divinity was distorted and through the political power propagated the same and has spread the message of opting for a condemned status of being at the mercy of God or Gods that might be. Abject slavery to what is called Divinity by various names was promoted to one of responsible participative philosophy of action with the Divine, which is the basis of the spiritual life of this country. Christianity if it were to be the soul of Christ perhaps things would have been different. As one luminary put it "there was only one Christian and that was Christ" is the truth. Christianity has a different soul and that brought along with it not the message of love but one of seeing in magnified way the defects of others and brings to the forefront the differences among people with an intention of comparison and contrast and consequent class or category conflict and rivalry.

This land, which was by and large the best in the world for practicing the principles of tolerance, even as recorded by the Chinese travelers and certain objective western visitors, was deliberately and in a planned manner made to feel the division and alleged discrepancies thereby fostering hatred and animosity. The differences between the Muslims and Hindus were exaggerated as against the efforts of the great men who tried to bridge between them as seen in the case of Akbar and others. The intention of the European countries was alien to the interest of this land both in terms of material prosperity and spiritual values. The religion, which was definitely meant for less evolved souls against the spiritual tradition of this land, was forced on this land leading to what is generally called the Mutiny by the western scholars. The colonial dictum of "divide and rule" was deliberately engineered to permeate the spiritual and social life of this land leading to its partition on the unviable basis of religion.

Of the few persons who could see the effort of the great emperor Akbar towards integration of different faiths was one of the forefathers of Sri Ramchandraji Maharaj. He worked in the court of the ernperor Akbar as Mir Munshi which is a post equivalent to that of minister in his council. He was awarded the title Bagara (Brave). He held a Jagir at Talgram in Avadh in U.P. This remained with the family for quite sometime.

One of the later descendents in the family, Sri Bakshi Kundan Lal was the Chief Army Officer under the Nawab Shujauddaulah and commanded the armies in the III battle of Panipat in the year 1761. Hafiz Rahmat Khan another ruler of that time who was impressed by the courage and bravery of Sri Bakshi Sahib borrowed his services. However in the battle at Fatehganj (near Shahjahanpur) in the year 1774 between Hafiz Rahmat Khan and Shujauddaulah, he was killed along with the new Nawab.

n the year 1824 Sri Shadi Lal the grandson of Sri Bakshi Sahib; and the great grand father of Sri Ramchandraji Maharaj was appointed as Diwan or Minister by the then Nawab of Shahjahanpur. His son Sri Janaki Prasad however joined Civil Court at Budaun as Munsarim. Sri Badri Prasad the revered father of Sri Ramchandraji Maharaj was born at Budaun on 12th July 1867. After a brilliant academic career, he started legal practice in 1892 at Shahjahanpur and later became Special Magistrate I class. He was a great scholar of History and his work on the ancient period of Indian History "Mush rif-ul-Tarikh Hind" in Urdu which was till now in manuscript is now translated and printed by the Institute of Sri Ramchandra Consciousness as a service to the Master.

Please click here to Register online for a Free training course in P.A.M.
Go to Gallery